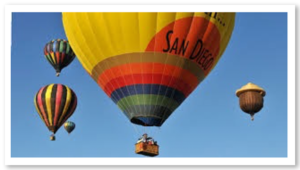 The summer sun was just beginning to set over the Pacific Ocean on this particular day. I could always tell it was that time of day, that time of year in San Diego, because from my grandfather’s backyard we would see half a dozen hot air balloons lifting off for a sunset flight. They sailed over his house so closely that we would wave and shout “hello” to the passengers in the baskets and hear the “whoosh” sounds from the hot air being released into the balloons above.

On this particular day, like every other day, I parked my car in my grandfather’s driveway, made my way up the steep front walkway, opened the black metal gate, and took in the sweet smells. Orange, tangerine and lemon trees grew in the corner of the yard. Star jasmine, gardenia and rose bushes bursted with color on the side patio. As I passed by the front window and knocked on the door, I saw my grandfather, with his head of wavy white hair, sitting at his desk. 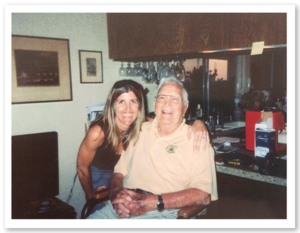 It took him a few minutes to answer the door. He was probably adjusting his hearing aides. He was in his 80s, after all.

“Hi Susan!” he bellowed in his deep, rumbly voice as he reached out to hug me. “Come on in. I was just finishing up”. We walked back to his office and he sat down in a tall director’s chair with the words “THE ADMIRAL” stitched onto the back.

I smiled. He was always up to something interesting. And this particular day was no different.

He chuckled in his low gravely tone.

“Well, I just got off the phone with John”, he replied. “He was calling me from Italy with a few questions.”

“Well, yes” he replied, assuming I knew what he was talking about. “John wanted to discuss the possibility of his character standing in front of the other characters in the movie scene. I had to let him know that someone of his military rank at the time would not stand in that particular position, so it would not be appropriate for his character to do so in the movie.”

“Yes”, he said with his usual authority. “I guess when you are used to performing in front of millions of people, you are used to getting what you want. But in this case, it just won’t work”.

“Granddad, YOU WERE JUST ON THE PHONE WITH JON BON JOVI?” I said in amazement.

It was just any other ordinary day in the life of my grandfather, Vice Admiral Patrick J Hannifin. (see https://en.wikipedia.org/wiki/Patrick_J._Hannifin) 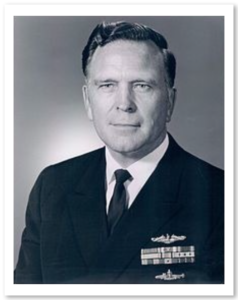 It turned out that my grandfather had been hired as the Technical Advisor of a new Hollywood film called U-571- starring Jon Bon Jovi, Matthew McConaughey, Bill Paxton, and Harvey Keitel. The movie’s Director, Jonathan Mostow, flew Granddad out to Italy for a few months of shooting, then flew him back home to San Diego where he would still take phone calls from the cast and crew. So Bon Jovi had called to ask “The Admiral” some admiral-y technical questions about his character, who was a submariner during World War II. 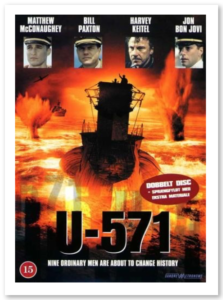 During World War II, my grandfather served on the submarine USS Balao. He lived in that metal capsule under the ocean for months at a time, fought a battle that went on mostly above him, and survived being depth charged by Japanese torpedo ships while cruising around at the bottom of the Red Sea. He later went on to command the USS Diodon, USS George Washington, and USS Lafayette and in 1968 was given charge of all of the Polaris submarines in the Pacific Fleet. Granddad’s expert knowledge on submarines and WWII warfare was exactly why Bon Jovi had called him for advice. Bon Jovi knew the environment of the music industry. But the Admiral knew the environment of submarines and war.

I once knew certain environments too- the environment of marriage, two parent families, raising a small child, traveling, living overseas, university life with a professor, social work. But when grief, trauma, and death struck my life in 2012, I felt as if I knew NOTHING. As if a spaceship had landed, scooped me up, and dropped me off on an alien planet. I had been mentally, physically, psychologically, socially, spiritually altered by GRIEF and TRAUMA. In an instant.

What is this place?

Oh, yeah. This must be Grief-land. The United States of Trauma-ville.

Where nothing makes sense. Nothing seems familiar. Nothing feels right.

Where nobody understands. Nobody has a clue. Nobody can make things better.

The gym had always been a second home to me. It’s where I worked as a summer camp counselor, where I learned to lift weights, where I swam in the pool, where I met my husband. It was always a place of rest and safety.

One morning six weeks after Brent died, I managed to crawl into the gym. I was in search of the tiniest tad of respite. I pulled the weight machines while on autopilot, feeling the silent stares of pity that flew at me from every corner of the room. I moved the Stairmaster in a trance, noticing the people who whispered in my direction. I went into the locker room and stood in line to take a shower, exhausted from not doing much.

And as I stood there in line- half naked with shower bag in hand- a woman approached me from behind. She began peppering me with questions:

“I HEARD! WHAT HAPPENED?! How did the accident happen? Were you there? Or did you get a phone call? What did they say? What did your family say? I heard the roads are dangerous there? What are you going to do now? What about your son? How old is he again? He’s really young, right, like 4 or 5!?”

And as I stood there in all my raw vulnerability and pain- still half naked with shower bag in hand- I had three simultaneous thoughts:

But wait. There were also places, people and things that somehow felt ok, that gave me some comfort, that helped in some way. Did I need to get rid of EVERYTHING and EVERYONE from my old life?

I remained stuck in indecision for awhile, trying to determine who and what from my OLD ENVIRONMENT (pre loss) fit into MY NEW ENVIRONMENT (post loss).

I eventually busted out an ECO-MAP to help me sort things out.
I had to get to KNOW MY NEW ENVIRONMENT.

An ECO-MAP is a written diagram (“map”) of one’s environment (“eco”). Social workers have used eco-maps for decades as simple tools to chart and assess both positive and negative relationships within the social environment of individuals, families, and groups. Eco-maps can basically give us a visual picture of our current life. Through them we can see our relational strength areas and stressors- and then we can make plans to alter, modify or use those relationships. 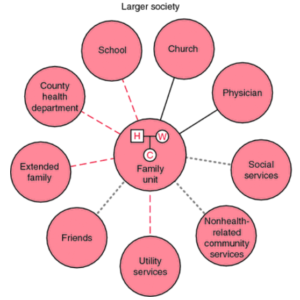 For those of us whose lives have been altered by grief and trauma, eco-maps can help us provide clarity and focus about our social, emotional, behavioral and spiritual environments. They can also help us eventually decrease the overall anxiety, stress & pressure we may feel in certain relationships that don’t serve us in our new post-loss life.

As a social worker, I had drawn eco-maps for OTHERS countless times.

Now it was time to draw one for MYSELF.

Over time I CHANGED (aka: “left behind”) my gym, my hairdresser, a grocery store, my church, certain old friends, certain relatives, and (eventually) my job. I STRENGTHENED relationships with my parents, certain old friends, a cousin, an aunt, new peers in the loss community (like Robin & Lisa, pictured below!), volunteer organizations, nature, outdoor activities, and healing mentors. I chose to LEAVE & REVISIT ideas about altering my child’s school and our city of residence. 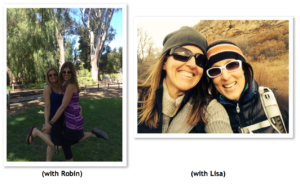 (Strengthened relationships with peers in the loss community)

Here is a sample eco-map for you to try filling in. (For a printable, downloadable version, see K- Know Your New Environment in the A2Z Toolbox.) This exercise will take you 10-20 minutes. Just find a pencil, paper and a calm space! 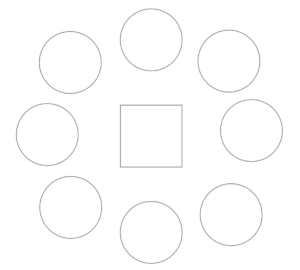 J ~ Journal to Survive the Tornado